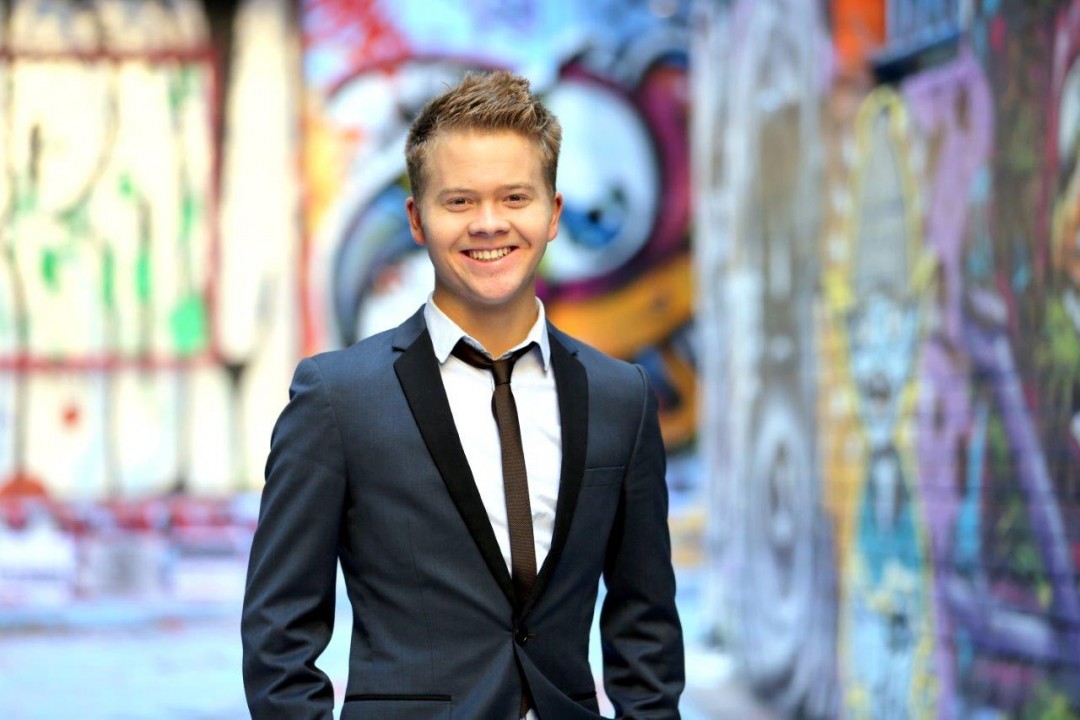 At just 21 years of age, Liam Burrows is a truly prodigious and gifted young performer. His amazing talents have certainly kept him in high demand. Over the past three years he has performed over 250 public, corporate and private shows including some for the largest corporations and charities in Australia.

Besides being on Australia’s Got Talent, Liam has appeared on Channel 7 Melbourne’s Good Friday Telethon (where he performed two songs with a large orchestra) Channel 10’s The Circle and Channel 7’s The Morning Show (three times) and Channel 7 Perth’s Telethon where he received a standing ovation.

Liam’s numerous YouTube videos have been watched by thousands, with his Australia’s Got Talent audition achieving nearly 2 million views.
Since July 2011 he has enjoyed a meteoric rise to the top of the music scene whilst continuing to develop as an exceptional and unique entertainer, performing all over Australia as well as overseas.

He has earned the respect of fellow professionals and stunned the public with a mature vocal style and stage presence that is way beyond his years.
Liam brings to his music a level of technical ability, scatting and realisation of phrasing that can only be described as incredible.
Despite his youth, Liam is no newcomer to performing…..he began singing at the age of two, played classical piano at six and took up the trumpet at nine.  At the tender age of twelve Liam was inspired to sing jazz and swing.

By the time Liam was fourteen, he had completed all four Australian Music Examinations Board Contemporary Jazz Vocal exams attaining consistently High Distinctions. Liam achieved further outstanding success in 2008, winning the highly-competitive Open-Age Jazz Vocal Division of the Sydney Eisteddfod when just fourteen. The accolades continued in the same year when he was awarded the Central Coast Jazz League scholarship for Most Promising Young Jazz Artist.

In 2009 he captivated audiences at the famous Montreux Jazz Festival in Switzerland where he received a standing ovation. 2010 saw Liam featured  as an outstanding rising talent at Newcastle Jazz Festival where he performed with his Quartet and later in the year was nominated for a MO Award as Best New Talent.

In that same year Liam was one of six vocalists selected nationally by jazz virtuoso James Morrison to perform at the prestigious “Generations in Jazz” at Mt Gambier, South Australia.  At only sixteen years of age he was the youngest-ever vocalist in this acclaimed event. He was also invited to perform again the following year.

In 2011 he appeared as a contestant on the top-rating National television show “Australia’s Got Talent”. Liam’s passion and enthusiasm for bringing jazz to a wider audience captured the attention of the general public and he was voted through as the people’s choice for each level of the competition. He was thrilled to become a Grand Finalist – coming 5th in the competition out of 19,000 entrants.

The amount of time required by the TV show and a steady stream of requests for personal appearances and performances, instigated Liam’s decision to leave school to work as a professional musician and entertainer. As a result of his success on Australia’s Got Talent, Liam was signed to a management agreement with TV Producer/Director Jack Strom who entered the artist management field after discovering Australian teenage pop/rock sensation Vanessa Amorosi whom he managed internationally for nearly 9 years.

His independently-released and critically acclaimed debut album “All Of Me“, a timeless collection of 20 swing hits (recorded when he was only seventeen) was launched in Melbourne in October when he performed to a full house at the Palms Showroom in the Crown Casino Entertainment Complex – accompanied by an 18 piece “Big Band”. At the end of the two-and-a-half hour concert, he performed two encores and received standing ovations.

Liam was the opening act for the legendary Pointer Sisters during their entire National Tour in November and “sang-in” the New Year when he headlined the prestigious event at Sydney’s Taronga Park Zoo – accompanied by the “Big Band” once again.

In May 2012, Liam was thrilled to be named “BEST JAZZ ARTIST” at the Australian Music Industry’s MusicOz Awards held at the Sydney Opera House.
In July he appeared at the Surfers Paradise Festival. This was followed by an appearance at the Broadbeach Jazz Festival in August when he performed with a 14 piece band at Jupiters Hotel and Casino’s newly renovated theatre.

The event “Jazz With the Stars” featured Liam with James Morrison/Emma Pask, Grace Knight and David Campbell. Each artist performed for 30 minutes and Liam left the stage with the audience asking for more. In the same month Liam, for the second consecutive year, headlined at the Noosa Jazz Festival (this time with his own six-piece band) and also performed a guest spot with a local “Big Band” the following day.

Liam has also appeared with his quartet at major Jazz venues in Australia including The Apartment and Bennetts Lane in Melbourne, The Vanguard and The Basement in Sydney and The Ellington Jazz Club in Perth. In August 2012 Liam won Second Place in the Vocal Performance category of the International Unsigned-Only Music Competition. The competition received almost 7,500 entries from over 80 countries.

In December he appeared at the Norfolk Island Jazz Festival and for the second consecutive year, Liam performed at the 2GO Xmas Carols at Gosford’s Bluetongue stadium.

In February 2013, he presented his three-hour concert at the Laycock Theatre in Gosford, NSW, to a sold-out house and once again received a standing ovation.

In the same year at the famous Mo Awards, Liam was presented with the Johnny O’Keefe Award which was created to acknowledge outstanding performance by a newcomer to the live performance circuit. In June Liam headlined at the Adelaide Hills Jazz Festival and in August, at the Broadbeach Jazz Festival. In October, he appeared at the prestigious Manly Jazz Festival, backed by the Andy Firth Big Band.

Liam, as a Finalist in the 2013 Unsigned Only Music Competition won an “Honourable Mention” for his rendition of an original song, ”You Shook Me”. There were over 9,000 entries from over 100 countries worldwide and as only 1% of all entries made to the finalist status and even fewer received awards; this was a remarkable achievement by Liam.

In October Liam was proud to perform at the prestigious Red Ball at Melbourne’s Crown Casino and Hotel for the Fight Cancer Foundation and in November he was asked to perform at the MusicOz Awards at the Star Entertainment Complex in Sydney. He was also a Finalist at these awards.
In December Liam was thrilled to be involved in a major car launch for Mercedes-Benz Melbourne and entertained at the glitzy black tie dinner with his sextet.

2014 commenced with Liam appearing at the Australia Day celebrations at Dee Why Beach NSW where he entertained a huge and excited crowd. In June he appeared at Jupiters Casino Townsville. Mid-year Liam released a video of a new song,“You Shook Me” and the song became available for digital download. The video went on to win “Best Music Video” and Best Visual Effects” at the 6th Annual MovieClub International Short Film Festival in Palestrina, Italy.

Liam also won two awards in the Vocal Performance category of the International Unsigned-Only Music Competition: Second Place of with his rendition of “Skylark” and an Honourable Mention with “Never Fallen In Love So Easily Before”.

In December, Liam performed at two corporate events in Hong Kong – for the British Chamber of Commerce and Hong Kong Polo After Dark and also completed the Musical Theatre Open Course at the National Institute of Dramatic Art. March 2015 saw Liam perform his first ever shows on a cruise ship.

Liam is currently completing a Bachelor of Music degree, majoring in Contemporary Performance.