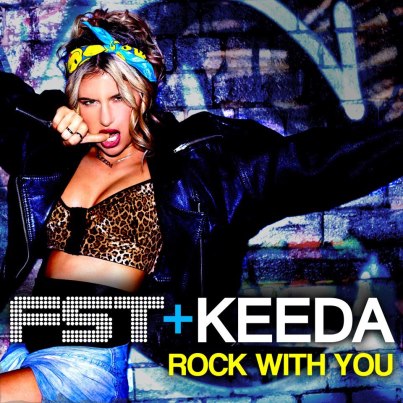 Little Sparrow PR client Keeda has released the much anticipated follow up to her first single ‘Ain’t No Cinderella’. ‘Rock With You’ is a collaboration with producer/writer FST (Tim Madden). The song is a dynamic dance-pop track with an epic catchy chorus and dirty dubstep breaks.

FST, whose songs and music videos have featured in the top 10 on Youtube described working with Keeda as very organic. “When we were in the studio everything just seemed to click. I think we’re on the same page musically – we’d be writing to different beats and then all of a sudden we’d be talking about which Michael Jackson song is the best and how the beat to Billie Jean is the greatest thing ever – then we’d be back to writing. It’s just fun. I’m really pleased with Rock With You, it’s one of my favourite songs I’ve produced and I think it embodies what happens when two artists are on the same page”. Keeda “I am so excited about Rock With You, it’s the kind of track that let’s you loose yourself on the dance floor”.

‘Rock With You’ is currently being serviced to radio via a media campaign and is accompanied by a killer video which can be viewed below. Stay tuned for more on Keeda who is making waves since her time on X Factor 2012. Expect big things to come in 2013.